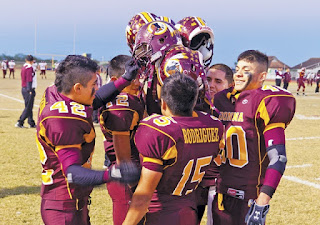 California Governor Jerry Brown signed into law a ban that prohibits California schools from using the name ‘Redskins’ as their team mascot. The change goes into effect on Jan. 1, 2017. This brought excitement and relief to some in the Native American community who have suffered emotionally and hypothetically from the Redskins mascot.

“I’m ecstatic that we can now move on from this racist sports name. It’s about time,” said Running Raccoon of the Whinywhiny tribe. Sitting with fellow tribe members at a local bar in Paso Robles, Raccoon continued to celebrate and bought ‘firewater’ shots for everyone.

In response to the new law, many of the school football teams have decided to change their name to ‘BrownSkins.’ Gloria Chavez, the Superintendent of L.A. County Schools, celebrated the law and changed a local school football name to honor Gov. Brown. “We’re so proud that Gov. Brown has taken us beyond early-20th Century racist sports names, and in honor of this we're changing the affected schools’ mascots to the BrownSkins,” Chavez said.
Posted by ~ Jonathan D. Hodges ~ at 2:33 PM