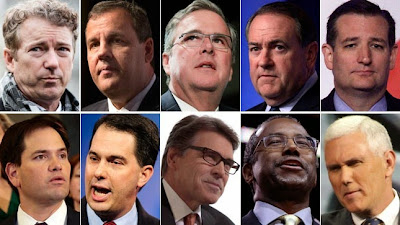 As the 2016 election kicks into gear, the GOP field is working rigorously to gain support from minorities. This week, all the official candidates started on the ‘Adapt or Go Home’ speaking tour, after signing a pledge to ‘Americanize’ minorities if elected President:

·        Ted Cruz spoke at the annual Asian-American Summit in Cupertino, CA: “You all have done an excellent job with assembling the iPhone 6; every time I look at mine I’m grateful for your work ethic and discipline. Now, when you in grocery store, you go so fast and cut in line - but when you on the road, why you drive so slow?” He then continued describing how his Canadian family successfully integrated into American culture.

·        Marco Rubio was a guest at the San Antonio Cinco de Mayo parade, and spoke on one of the floats that paraded on San Pedro Ave: “Mexicans are hard-working folks..extremely family-oriented. But haven’t you got the memo on over-population? I’m Cuban, and even we believe in birth control. Also, please turn down your mariachi music.”

·        Mike Huckabee addressed the Order of Ahepa in Belmont, CA during their annual Greek Festival: “You Greeks are strong, successful, and make the best lamb and cheese stuff I’ve ever had. But you’re so prideful, always talking about your ancestry. Sure, the Spartans were tough warriors, but they were also bisexual sociopaths…do you take pride in that? Anyway, Opa! Opa!”

·        Rand Paul was a featured speaker at the Punjabi Association in Seattle: “Indians are smart, determined, and contribute immensely to our nation’s tech infrastructure. But, here in U.S.A. we have price tags for a reason, you should keep the price haggling back in Bombay, or your local flea market. I’m 1/89th Indian, so I understand and relate to your culture - but there is absolutely room for improvement, and deodorant. By the way I love curry!”

When asked how they intend to ‘Americanize’ minorities if elected, the candidates didn’t provide specifics, but said that deportation/detention for those who don’t adapt might be a viable option.
Posted by ~ Jonathan D. Hodges ~ at 2:56 PM