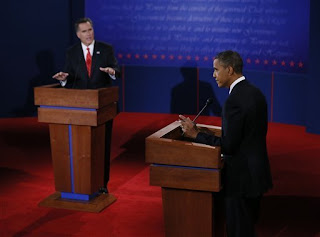 After the first Presidential debate on Oct. 3rd, Obama’s campaign has been exploring many options to improve his performance for the next debate. Jay Carney advised that the debate be televised during Monday Night Football to guarantee a lower audience, and David Axelrod suggested Bill Maher or Chris Matthews as moderators.

After much discussion with no apparent solution, Obama decided to take matters into his own hands. On Friday morning Oct. 5th the President signed Executive Order 8693, granting him full authority to:

Obama’s campaign and family in attendance cheered and clapped as he signed the Order. In a Press Conference afterwards, Joe Biden spoke to Media Matters about various options being explored to edit the footage for the next debate. He remarked that Obama should likely use Morgan Freeman as his voice-over, and Elmer Fudd for Romney.

This blog is so nice to me. I will continue to come here again and again. Visit my link as well. Good luck
obat aborsi
cara menggugurkan kandungan
obat telat datang bulan
obat penggugur kandungan

Use this article to increase your knowledge . obat menggugurkan kandungan

I really enjoyed your blog Thanks for sharing such an informative post.
clipping path
raster to vector
background removal
ghost mannequin

now present in your city