GOP Candidates Spar over Who Would Kill More People 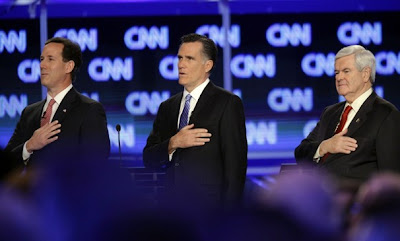 By Jonathan D. Hodges
With less than two days before the South Carolina Primary, the remaining four candidates traded non-stop barbs, from details of their personal lives to abortion and foreign policy.
The most heated moment of the debate began with a question about the threat of a nuclear Iran. The moderator, CNN anchor John King asked the contenders what their first action would be as President if Iran does not give up its nuclear ambitions. Newt Gingrich answered first, “There’s no question about it. I would press the button and launch a nuclear first-strike against Iran.”
The South Carolina audience immediately erupted with applause, prompting Rick Santorum to instantly point and say, “As President, I would also nuke EVERY Muslim and Arab country to send a message - you don’t mess with America!”
The audience continued applauding and began cheering wildly; meanwhile Santorum slowly turned and gave a smirk in the direction of Speaker Gingrich. Not to be outdone by Santorum, Gingrich quickly responded, “I would immediately launch nukes against ALL nations that collude with Iran, even if it means we are the only country left standing!”
With the exception of a few Ron Paul supporters, everyone in the audience jumped to their feet and started chanting ‘U.S.A! U.S.A.!’ with fists raised.
Feeling left out, Mitt Romney interjected, “I too would nuke every other country, as well as any one of the 50 States that maintained commerce or had any connection to the Iranians.”
The audience appeared stunned at Romney’s response, prompting him to hastily reply, “We’re number one!” - which sent the crowd into another standing ovation.
Standing silently and shaking his head this entire time, was Congressman Ron Paul, who eventually walked off the stage unnoticed.
~ End of Transcript
Posted by ~ Jonathan D. Hodges ~ at 10:03 PM 2 comments: Links to this post