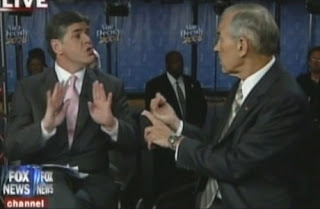 With the Iowa Caucuses approaching soon and Ron Paul rising in the polls, the attacks continue to mount against the Texas Congressman from both his rivals and the media.
Newt Gingrich recently derided Ron Paul supporters as “indecent” and said he would prefer Obama over Paul.
The latest attack from the press comes via FOX News host Sean Hannity, during a recent interview with Dr. Paul. Below is an excerpt from the Dec. 29th interview on the Sean Hannity Show.
Hannity: Congressman, I did some digging into your connections and found something I didn’t like.
Paul: Really?
Hannity: Yes. I viewed the profiles of some of your Facebook fans, and was shocked, horrified to see the kind of people whom you associate with.
Paul: I have no idea what you’re talking about.
Hannity: Well let me give you an idea. Hank Rommel - does that ring a bell Dr. Paul?
Paul: No.
Hannity: He’s been a Facebook fan of yours for nearly two years, and was recently convicted of armed robbery in Tallahassee, Florida. What do you have to say for yourself Congressman?
Paul: Well, I didn’t know him personally nor ever heard of –
Hannity: Excuse me, you should have known about this Congressman. This is serious business. The American people deserve to know the type people whom you associate with.
Paul: I’ve got nearly 664,000 fans on Facebook, and you expect me to do a background check on each one of them?
Hannity: No Congressman, that would be impossible. I just think that you haven’t done a good enough job in distancing yourself from Hank Rommel the robber, and the American people deserve a better explanation than what you’ve given them so far.
Paul: Goodbye Sean.
Hannity: What? Don’t leave Congressman. Well, I guess he couldn’t handle the heat. He’s always complaining about a lack of media coverage, and now he storms off the set. I don’t get it.
~ End of transcript
Posted by ~ Jonathan D. Hodges ~ at 10:59 PM

Is there a link to the video?

There's no way this is real. Thanks for the laugh, though.

The way this almost sounds plausible is frightening...

Thanks, Ain't My Media, for more than just a good laugh on this one.