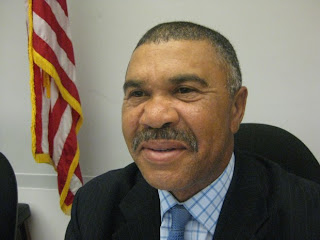 “Today is a monumental day for internet viewership equality" said Missouri Congressman Lacy Clay during a fiery speech before the House.

He has authored a bill called the ‘Youtube Viewership Equality Decree (YVED)' which would mandate that Youtube, and all other video sharing sites allocate a fixed amount of views to each submitted video.

Mr. clay also said “It is discriminatory to favor one video over another. I do not know who that ‘one’ viewer is who saw my speech, but whomever it is - he must be very offended to know that he is all alone.”

The speech to which he refers is one that he gave Feb. 22 on the House floor, where he derided Economist/Historian Thomas DiLorenzo, and mocked Austrian economics. When asked by reporters how many views his video should receive, he replied “Whatever Justin Bieber gets, I oughta get.”

The bill also has bi-partisan support from Republicans such as Rep. Eric Cantor - whose Youtube response to the State of the Union has received 11 views so far.

DiLorenzo should see this, seriously