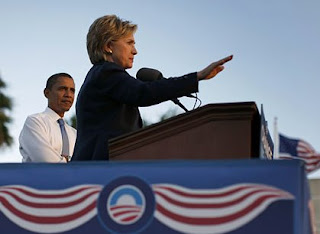 - Yes we can. Change. Hope. The crowd of 480,000 Obama supporters cheered uncontrollably as Senator Hillary Clinton started her much-anticipated speech with these now infamous campaign slogans.

She also affirmed her unwavering support for President-elect Obama, and pledged to serve her nation with dignity and honor as the next Secretary of State. "I promise you that we will take back this country, and to all of the naysayers out there, I harbor no ill feelings towards my former opponent - despite his lack of experience and substance." Obama organized the rally for Clinton to publicly acknowledge her acceptance of the position.

Nearly six minutes into her speech, the crowd began to yawn and to stare at their watches - waiting for her speech to come to an end. Noticing their boredom, Sen. Clinton immediately screamed, "Yes we can! Change! Hope!" This sent the entire rally into a state of ecstatic hysteria. And as she concluded, she led the boisterous rally with four Nazi salutes - chanting "Sieg Hiel!" President-elect Obama acknowledged the crowd's enthusiasm, and saluted back to them.

After the rally, Obama was interviewed by Brian Sussman, distinguished broadcaster and journalist. Sussman asked," Why did you pick Hillary as your Secretary of State, given that she and her husband never forgive and never forget?" Obama replied, "A very wise man once told me to keep your friends close to you, and you enemies even closer." 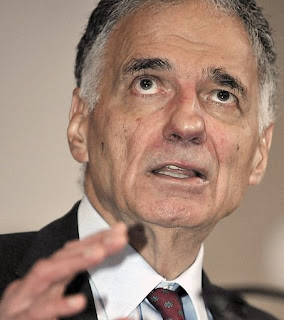 - After reeling from an overwhelming defeat in the popular vote, consumer advocate and Presidential hopeful Ralph Nader has refused to concede the election to Sen. Obama.

As he stood on the steps of the Tallahassee Court House, Nader reiterated his decision not to concede, and demanded a full manual recount. "This election was clearly stolen by Sen. Obama, and there is no other explanation that can be given to justify his victory." Nader also fielded questions from the press, which included reporters from the National Enquirer, Reader's Digest, and Aintmymedia - the only news outlets which gave coverage of his campaign.

As Nader concluded his Press Conference, he also bashed the Obama candidacy, claiming that the Illinois Senator was nothing more than a spoiler who took away votes that would have otherwise gone to him. "Obama has shown a complete disdain for the integrity of the electoral process by running a shallow campaign, stealing votes in every precinct, and taking away support from me."

Obama's campaign manager David Axelrod fired back. "This is a free country, and if Sen. Obama wants to run for President of the U.S. or for honorary chairman of the Weaverville Knitting Club, it is his constitutional right. The American people deserve more than only two choices."

Pending a decision from the Florida State Supreme Court, the manual recount could cost upwards to $90M, depending on the number of precincts.

Nader gained ballot access in 46 states, mobilized disgruntled independents, and ran an aggressive campaign. One thing is for certain - if Ralph Nader loses Florida, then Sen. Obama would indefinitely be labeled a spoiler for taking away the victory from him.