Obama Promises that Nobody Will Ever Die if He's Elected 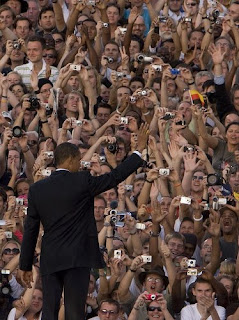 - While addressing a crowd of over 580,000 supporters in Chicago, IL, Sen. Barack Obama proposed a landmark plan to prevent all deaths from occurring in America. He dubbed it the 'Death Prevention Act.'

With shouts and cries of support from the crowd, Obama attempted in vain to quiet them down as he continued his speech. "I know you're all a little bit excited, but if anymore of you faint, I'm gonna run out of water bottles."

The climax of his speech transpired as he unveiled his plan to prevent all deaths from occurring in America, if he is elected President. The plan would include the creation of additional federal departments and regulatory agencies.
Sitting up front and waving signs that read 'Change' and 'Yes We Can,' representatives from the American Association of Retired People were arguably the loudest cheering supporters.

Nearly twenty minutes into his speech, Sen. Obama began taking questions from the crowd in a town hall fashion. Adam Botscker of Casper,WY asked Obama, "What can you do to prevent on-the-job head injuries? I nearly died on my construction job." Obama responded by saying that he would create a "Department of Concussion Prevention" to prevent all future head injuries.

Sally Potts of Albany, NY asked Obama what he would do to prevent suicide, given that her husband recently jumped off of the Brooklyn Bridge. Obama replied, "I am glad you asked that - in fact I have a plan to create another agency called the Department of Suicide, which will prevent all suicides from ever occurring again."

Anthony Gregory of Berkley,CA also fielded a question to Obama. "Senator, what can you do to prevent the deaths of our troops in Afghanistan and Iraq, and how are you going to pay for this proposed plan?" After pausing for nearly one minute, Obama responded, "Well, I promise to prevent all deaths from occurring in America, but not for overseas. And as for the money, my friend Ben Bernanke assured me that we will have enough to pay for this."

In concluding his speech, Sen. Obama promised to establish over 144 new federal departments and regulatory agencies as a part of his landmark 'Death Prevention Act.' 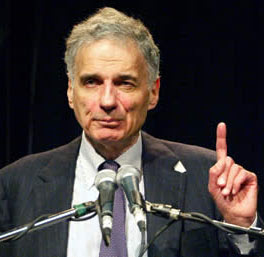 - In a recent address to People for the Ethical Treatment of Animals (PETA), Presidential candidate Ralph Nader spoke of his plans to reform animal health care.

"We live in a broken system that seriously deprives American pets and non-domesticated animals of adequate health care coverage," he said. "We must devise a policy that grants single-payer Universal Health Care to all animals - regardless of ethnic background or social status."

Nader also pulled no punches in his criticism of the two major parties. "This two-party dictatorship has steamrolled over the important issue of animal health care, and they ought to be ashamed. Both John McCain and Barack Obama are controlled by the same HMO and pharmaceutical lobbyists who have obstructed universal health care coverage for animals."

When he was asked by a talking parrot which of the animals would be excluded from the health care plan, Nader replied, "Elephants and donkeys."

McCain Promises to Declare War on the World

- During his annual speech to the Defense Contractors Association, Senator McCain outlined his plans to pursue a more aggressive foreign policy than the current administration. In attendance were representatives from BAE, Lockheed Martin, Halliburton and nearly fifty-five other Defense Contractors.

"My friends, we have to realize that there are many people around the world who do not like us. This is simply unacceptable. They are either with or against us."

Sen. McCain emphasized, that during his recent world tour with Senators Graham & Lieberman, no one applauded or cheered for them upon their arrivals. "Frankly we were insulted. We took the time out of our three day work-week to visit London, Beirut, Paris, and Rome, and not so much as a 'Thank You' from those ungrateful foreigners."

This elicited a score of 'boos' from the audience, as Sen. McCain concurred and nodded his head in disbelief. He then began to shake and turn red, with his wife Cindy calming him down and waving a fan in his face.

After regaining his composure, Sen. McCain continued to expound upon his new foreign policy. "We are at a time when the world is solidly against us, and at this point it's either us or them. I'm sorry my friends, but this is a zero-sum game."

Nearing the end of his speech, McCain added, "If elected President, I will initiate a pre-emptive war against the entire world, utilizing every military resource available." The whole crowd quickly erupted in cheers and applause for Sen. McCain.

Stanford Rejects Major Donor Because of His Odd Name

- During a recent press conference in front of Hoover Tower, Stanford University President John L. Hennessy explained why he refused to accept an $85M donation.
"After reviewing all the necessary details and conducting a thorough cost-benefit analysis, I have decided it is in the best interest of this dignified institution to reject the proposed donation."
The angry entrepreneur who offered the donation is Randolph McDougahinkey, a Bay Area Real Estate magnate.
President Hennessy further commented, "As he sat across from me and proceeded to sign his $85M check, I asked him what he needed in return for his generous contribution. He requested that I change the name of our Cafeteria to, 'The Randolph McDougahinkey Culinary Emporium."
"I then requested that he leave my office, and never return again to this noble institution."
- End of Transcript
Posted by ~ Jonathan D. Hodges ~ at 11:03 AM 1 comment: Links to this post

Russian Prime Minister Admits to True Cause of Georgian War 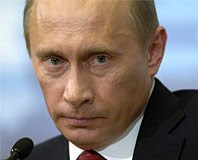 - Today Russian Prime Minister Vladimir Putin admitted as to why he escalated the recent bloody conflict with Georgia, in an exclusive interview with the Unassociated Press.

"I never knew that it would come to this...so many military vehicles destroyed, buildings demolished and dead civilians." When asked to go into further detail of why this conflict initially began, Putin further explained.

"Last year, during Christmas, Georgia President Mikheil Saakashvili promised me that he would not use any aggression towards the autonomous provinces of South Ossetia and Abkhazia. He also promised to send me a vintage bottle of 1968 Vodka as a 'Token of Peace.'

"I waited, and waited for my Vodka. Not even my boss President Dimitry Medvedev could cheer me up. So, I had to make that Georgian swindler pay, when I had the opportunity. Luckily, his invasion of South Ossetia gave me the chance to apply the necessary retribution as needed. So, if Saakashvili wants to end this bloody conflict, he had better send me my Vodka."